An enthralling, action-packed adventure through time awaits you in Sons of the Sphinx by Cheryl Carpinello.

Is seeing dead people a gift or a curse? Fifteen-year-old Rosa is certain it’s the latter. When the ghost of King Tut asks for her help in finding his lost queen, Hesena, Rosa finds herself traveling through different time periods in ancient Egypt pursued by Horemheb who, with the help of evil magic, is determined to stop her.

Wow! What a wild ride. From beginning to end, this is a story of love, adventure, and danger. Carpinello does a fine job in creating Rosa, whose gift interferes with normal life. Her connection to Tut and Hesena may go deeper than even she realizes. The author created a thrilling story where the danger kept building into a final showdown that leaves the reader breathless. Her attention to detail and historical knowledge draw the reader in just as much as the plot.

Sons of the Sphinx is a fabulous tale that lovers of ancient history, time travel stories, and the paranormal will enjoy.

I received a digital copy from the author. This review contains my honest opinions, which I have not been compensated for in any way. 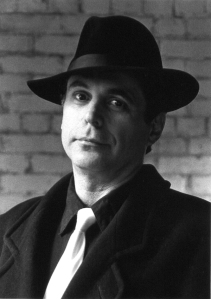 Michael Sussman is the author of Crashing Eden, a YA fantasy/paranormal novel, and Otto Grows Down, a children’s picture book featuring illustrations by Scott Magoon.

Dr. Sussman is a clinical psychologist and has also published two books for mental health professionals. He’s the author of A Curious Calling: Unconscious Motivations for Practicing Psychotherapy and the editor of A Perilous Calling: The Hazards of Psychotherapy Practice.

Dr. Sussman resides in the Boston area with his son, Ollie.

Thank you for joining us today, Michael. Can you please start off by telling us a bit about yourself?

Sure, Cheryl. I’m a clinical psychologist and the first two books I published were written for psychotherapists. Once I became a father, I enjoyed reading picture books to my son. I decided to try my hand at writing one, and my debut picture book—Otto Grows Down—was published by Sterling with illustrations by Scott Magoon. As my son grew older, I started writing for an older audience, and the result is Crashing Eden, a YA fantasy/paranormal novel.

Even when I was five or six I kept a diary. In middle school I wrote short stories, and in high school I started writing poetry and lyrics for songs I composed on piano and guitar.

Why did you decide to write stories for the YA market?

As my son grew older, I started reading books that he was reading for school. I also went back and reread some of my favorites, like Catcher in the Rye and Lord of the Flies. I liked the challenge of creating an adolescent protagonist, which was tough because my own adolescence had been a painful period of my life.

What is your favorite part of writing for this group? What is the greatest challenge?

I like writing a fast-paced story that grabs the reader’s attention and doesn’t let go. I also think that teen and young adult readers are particularly open-minded and willing to explore uncharted territory.

The greatest challenge was revisiting my own adolescence and young adulthood. I dealt with a great deal of emotional turbulence at that time, even bouncing in and out of psychiatric hospitals. Writing the first draft, there were times when I broke down and cried. (Of course, often this was simply because I felt my writing was so lousy!)

Crashing Eden tells the story of Joss Kazdan, a 17-year-old juvenile delinquent who is depressed and guilt-ridden following the loss of his younger brother. After suffering a concussion, he awakes to a beautiful sound that no one else can hear. He becomes convinced that it’s the primordial vibration of the universe, and by attuning himself to it he experiences ecstasy and feels at one with the cosmos. Things get even stranger when friends of his are able to construct a device that produces this same Edenic consciousness. I don’t want to spoil the story, so I’ll just say that what starts out so promising, soon leads to generational conflict and cataclysmic destruction that threatens the very survival of humanity! 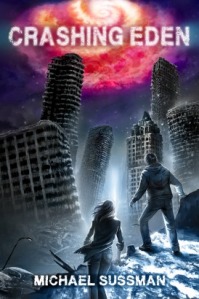 When I was nineteen I lived in a commune in Nova Scotia, in a town called Paradise. One night, I suffered a concussion in a car crash in which I was a passenger. Like my protagonist in Crashing Eden, I spent the days following the concussion in what I can only call a state of grace, filled with deep feelings of gratitude and joy.

I’ve been interested in world mythology for many years, and am especially intrigued by the widespread myths suggesting that humans have degenerated from an ancient state of grace, symbolized by Paradise or the Golden Age.

I began to wonder what might happen if we were somehow able to recapture the state of mind experienced by people before the Fall. What if we built a device that altered our brains in such a way that we felt like we were back in Paradise?

Do you have a website and/or blog where readers can find out more?

Yes, I recently started it! Here’s the link: http://www.MichaelSussmanBooks.com

I’m working with a fabulous illustrator on a children’s adventure story in verse, titled The Great Gogglemog. This summer I’ll be starting a new novel.

Thank you for spending time with us today, Michael. We wish you much success.

Thank you for helping me get the word out about Crashing Eden.