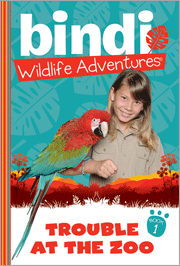 eaders can jump into the shoes of Bindi Irwin in this fictional adventure series based upon her life. Trouble at the Zoo is the first book in a planned six-book series titled, Bindi Wildlife Adventures. In this installment, it is Bindi’s birthday, and she is celebrating at the Australia Zoo. With the Irwin family and visitors dressed as sea creatures, Bindi is excited to tell everyone that the proceeds from the day’s event will be used to help prevent whaling in Antarctica. Things soon turn tense when Bindi’s younger brother, Robert, spies a visitor stealing an eastern water dragon. With the help of a green-winged macaw and some quick thinking, Bindi saves the day.

My daughters have been Bindi fans since they saw her in The Wiggles: Wiggly Safari, when she was about 4; so, they were thrilled to have a chance to read Trouble at the Zoo together. The book opens with a page that is one of Bindi’s diary entries, which is written after the events in the book took place. I noticed that books one and two are written by different authors. This kind of surprised me. The reason I picked it up is because the second book flowed a bit better than the first.  My daughters (ages 7 and 9) did not feel any different about the books. They loved both of them.

What I feel Trouble at the Zoo did well is portray the exuberance and excitement of Bindi Irwin. Like her late father, Steve, she captivates her audience, which allows her to share her conservation message. Her personality is so well captured in this book that you would swear Bindi was in the room relaying the story to you.

In the second book of Bindi Wildlife Adventures, Rescue, Bindi and her friend Hannah are on a guided horse-riding trek in South Africa. Bindi is thrilled that she is going to get a chance to see many kinds of African creatures. Their adventure is quickly sidetracked when the girls discover the supposed breeding sanctuary for the endangered giant sable antelope is actually a game reserve where rich men hunt the game for sport. When the girls are caught spying, they find themselves in grave danger.

Rescue follows the same format as Trouble at the Zoo, with the first page an entry from Bindi’s diary that talks about her adventure in South Africa as a teaser, and the full story following. Overall, I enjoyed this story a bit more than the first. The writing style is similar, capturing the essence of Bindi within its pages, but this one is more polished. Bindi’s mom, Terri, and brother Robert, play roles in this book, just as they did in the first one, which gives fans a feeling of being in familiar territory. Though Bindi is the focus of the books, readers witness the interaction between Bindi, her mom and her brother, in addition to the relationships they have with friends. It’s definitely a nice touch. It also allows the conservation message to be relayed in a way that it doesn’t come across like a hammer hitting you over the head. The reader watches the family’s dedication to wildlife and wants to be a part of that mission. I feel this is very important because the books aim to discuss serious topics, but because of how they are written, they are able to deliver that message and still be light. 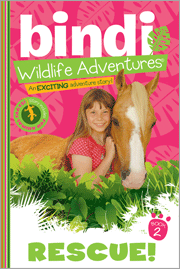 Both Trouble at the Zoo and Rescue have colorful, fun covers that young readers will find attractive.  Each book includes Animal Fact Files containing information about the animals mentioned in the book. There is also a page with a link to a website where readers can sign up to be a Wildlife Warrior. Both books are available now at a variety of online retailers. Book 3, Bushfire, and Book 4, Camouflage, will be released in June.

I’m excited about the Bindi Wildlife Adventures series. It’s a great way to honor the legacy of Steve (The Crocodile Hunter) Irwin, and teach kids the importance of protecting the creatures that share our planet.

Trouble at the Zoo

I received copies of these books from the publisher in exchange for my honest opinion. I received no monetary compensation for sharing my views.