A gripping, emotional story of a young woman’s journey to belong and be free to pursue her dreams is what you’ll find in The Secret Side of Empty by Marie E. Andreu.

A straight-A student on her way to becoming valedictorian, M.T. watches while her friends get their driver’s licenses and make college plans. As an undocumented immigrant, M.T. lives in constant fear of being found out, while coping with her domineering, paranoid father who believes her education is a waste of time. Not even her best friend, Chelsea, knows the truth.

Pressure mounts as the National Honor Society wants M.T. to plan their trip abroad and M.T. begins a relationship with Nate knowing she will never fit into his perfect, wealthy, all-American life. Can M.T. learn to trust herself and others to stake claim to the life she wants?

Drawing on her own experience as a formerly undocumented immigrant, Andreu creates a superbly told, thought-provoking story that tugs at every heart string. Readers will be captivated by this young woman’s plight of seeking dreams just outside of her grasp and diminished by her militant father whose only desire is to earn enough money to return to the country of his birth, ripping M.T. away from the only land she has ever called home.

While illegal immigration is a highly politicized topic, The Secret Side of Empty isn’t a story about undocumented immigrants. It’s the story of a girl growing up in America who has to hide a secret that can end life as she knows it. It’s the story of friendship and learning to trust others. It’s a story of family and how they shape us; how they can hold us back and often how they lift us up. While I definitely believe this novel will challenge beliefs about illegal immigration, in the end, readers will remember The Secret Side of Empty because of its believable and inspiring heroine.

I received a copy of this book from the author’s publicist. This review contains my honest opinions, which I have not been compensated for in any way.

COMING NEXT SPRING… The Secret Side of Empty

**Read about the book and scroll below for details on how to enter to WIN a $250 Amazon gift card just by liking the author’s Facebook page!**

M.T. is starting her senior year with a lot going for her. She gets great grades, has a best friend she met in kindergarten and a boyfriend who is sweet and into her. But life – at least as she knows it – is about to end.

M.T. is what the news calls “illegal” – she came to the U.S. with her parents as a baby and never got the right papers that allowed her to stay. She lives in fear of her family getting deported, in even more fear that she’ll have to go to the home country she doesn’t even remember, of people finding out her ugly secret and of the increasingly volatile situation at home. When senior year is over, the protected world she’s found in her small parochial school will disappear. Without a social security number, she won’t be able to go to college, get a job or, maybe worst of all, get a driver’s license.

But she’ll worry about all that later. First, she’s got a senior year to take on.

The Inspiration Behind The Secret Side of Empty by Maria Andreu

The Secret Side of Empty, in bookstores Spring, 2014, is the story of a high school senior, M.T., who is hiding a big secret: she’s “illegal.” Her parents brought her over as a baby and overstayed their visas. She’s American in every way except one: on paper. No one knows, not even her best friend Chelsea and her sweet boyfriend, Nate. With senior year coming to a close, she has to figure out how she’ll build a life with no social security number, no college, no driver’s license and no way to get a real job. But first she’s got to make it through senior year.

The inspiration for this story came from my own experience. I, too, came over to the U.S. as a baby and was undocumented as a teenager. Being a teen is hard enough, but when you mix in the fear of getting deported from the only country you’ve ever called home due to a decision you had no hand in making, it’s really stressful and it makes you wonder why you don’t belong when everyone else does.

Looking back now, I realize I was almost magically lucky. When I was 18 there was an amnesty and I was able to become a citizen. Suddenly, everything I thought was hopelessly out of reach – a college degree, a house, trips abroad, a job – became possible. My first reaction was to put it all behind and forget it. I look just like everybody else, so I figured I’d just pretend I was.

I tried to forget my experiences for 20 years. It wasn’t until after 9/11, when the rhetoric about immigrants got so ugly, that I began to feel that it was irresponsible not to share my story. The news was filled with all kinds of negative news about immigrants, trying to play on people’s fears. I realized that I could help shed light on the human side of the experience, and that’s what I set out to do in The Secret Side of Empty.

First and foremost I set out to write a book people would want to read. It’s not a political book at all. M.T. doesn’t care about the issue and isn’t up on the news about it. She just wants her life to work out, she wants to stop being so afraid that her boyfriend is going to dump her, and she tries to cope with the fact that the people around her have so much more than she has but don’t appreciate it. She wants to figure out what to wear to the dance, what to write in her latest English paper. That’s it. But of course she’s caught up in these forces that are so much bigger than she is.

Writing this book was tremendously therapeutic. For the longest time, my own background as an undocumented immigrant was my deepest, ugliest secret. Revealing it while talking about the book opened me up to a lot of compassion and warmth from people. And, most of all, it helped me understand that the truth has a great healing power.

I would love for you to take this book-publishing journey with me, from cover reveal, to first galleys, to an inside peek of what it’s like to do a book signing (There will lots of fun giveaways along the way). When I was growing up poor and undocumented, I never believed I could make this dream come true. But here it is! Like my Facebook page for news on the book and also to enter to win a $250 gift card. https://www.facebook.com/maria.andreu.books 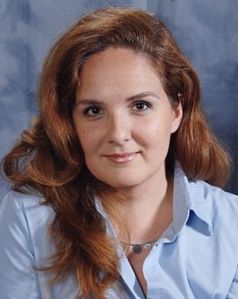 Maria Andreu is an author and immigration rights activist. She lives in beautiful Bergen County, New Jersey with her two wonderful middle schoolers. At the age of 12, she wrote in her diary, “Most of all, I want to be a writer.” Growing up undocumented and poor, she never imagined that dream might come true one day. Her work has been published in Newsweek, The Washington Post and The Star Ledger and her first novel, The Secret Side of Empty, will be published by Running Press in Spring, 2014.

A Note from the Author, Maria Andreu:

The fulfillment of great dreams feels best when shared, which is why I’m inviting people to Like my Facebook page and come along with me on the fabulous and improbable journey of publishing my first novel.  As my thanks, when you like the page by July 31st, you’ll be able to enter to win a fan-only sweeps for a $250 Amazon gift card!

Be the first to get updates on the cover, new tour stops, and fan-only content (plus enter a sweeps for a $250 Amazon gift card) by liking the author’s Facebook page here:  https://www.facebook.com/maria.andreu.books

The book is already getting industry buzz and news coverage, so Like the FB page to get updates on that as well.