As a seamstress in the Big House, Clara dreams of a reunion with her Momma, who lives on another plantation–and even of running away to freedom. Then she overhears two slaves talking about the Underground Railroad. In a flash of inspiration, Clara sees how she can use the cloth in her scrap bag to make a map of the land–a freedom quilt–that no master will ever suspect.

“A particularly effective way to introduce the subject to younger children, adding a trenchant immediacy to their understanding of a difficult but important chapter in the country’s past.”– (starred) Horn Book.

“This first-rate book is a triumph of the heart.”— (starred) Publishers Weekly. 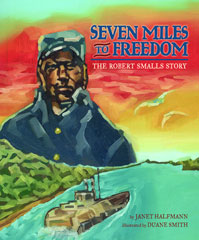 Growing up a slave in South Carolina, Robert Smalls always dreamed of the moment freedom would be within his grasp. Now that moment was here.

Robert stood proudly at the Planter’s wheel. Only seven miles of water lay between the ship and the chance of freedom in Union territory. With precision and amazing courage, he navigated past the Confederate forts in the harbor and steered the ship toward the safety of the Union fleet. Just one miscalculation would be deadly, but for Robert, his family, and his crewmates, the risk was worth taking.

Seven Miles to Freedom is the compelling account of the daring escape of Robert Smalls, a slave steamboat wheelman who became one of the Civil War’s greatest heroes. His steadfast courage in the face of adversity is an inspiring model for all who attempt to overcome seemingly insurmountable challenges.

In late 1861 freedom suddenly grew closer for Robert and Hannah. The Union navy captured Fort Royal, just down the coast from Charleston. A Union fleet set up a blockade at the entrance to Charleston Harbor. Looking thorough the captain’s field glasses, Robert could see the northern ships. The Union lines and freedom were within reach—only seven miles away.

“The daring Civil War escape of a slave, his crew and their families in a stolen Confederate supply boat receives appropriately inspirational treatment in this new picture book. . . .Smith, a newcomer to picture books, sketches out scenes and characters with broad daubs of oil, creating a sculptural effect that heightens the monumental nature of Smalls’s deed. Page turns and textual pacing combine to relate the actual escape with pulse-pounding excitement; readers’ relief at Smalls’s success is almost physical. A triumph.”

“This book is an excellent vehicle to bring [Smalls’s] story to a wider audience. . . .The oil paintings employ thick, bold strokes and deep saturated colors to convey Smalls’s strength and determination in successfully delivering his and his crew’s family members to freedom.”

“The story is simply told with the appropriate perspective of the era and the risks taken by the participants. Dramatically illustrated, this book should find a sympathetic audience among young readers and help reestablish in public memory the existence of a remarkable person.”

Purchase Seven Miles to Freedom by Janet Halfmann at:

Teaching guide for Seven Miles to Freedom by the National Museum of American History:
http://americanhistory.si.edu/ourstory/activities/smalls/

Janet Halfmann is an award-winning children’s author who strives to make her books come alive for young readers and listeners. She has written more than thirty fiction and

Before becoming a children’s author, Janet was a daily newspaper reporter, children’s magazine editor, and a creator of coloring and activity books for Golden Books. She is the mother of four and the grandmother of four. When Janet isn’t writing, she enjoys gardening, exploring nature, visiting living history museums, and spending time with her family. She grew up on a farm in Michigan and now lives in South Milwaukee, WI.

The Golden Pathway by Donna McDine is the touching story of one boy who is willing to take great risks to help someone in need.

Every night David listens to his pa mete out his punishments on the slaves working their farm. He smells the alcohol on his breath. He watches as Ma is never treated with respect. He never expects his pa to be nice to him.

One night after Pa whips their teenage slave, Jenkins, David sneaks out of the house and promises to help him escape to a better life.

The Underground Railroad, also considered the “golden path to freedom”, helped numerous slaves escape the hardships foisted upon them by their owners. In this inspiring story, McDine has brought this portion of history to life for readers ages 9 to 12. The Golden Pathway shows how just one person who cares can make a difference in this world. It is a moving story that will educate readers and encourage them to be a person who makes a difference.

I’ve been a fan of K.C. Snider’s artwork for some time, but she has truly outdone herself with The Golden Pathway. From the cover art to the interior illustrations, each brings David’s and Jenkins’ story to life in a visual way. From the tears running down David’s cheeks to a bent over Jenkins who has just endured another beating, and from chore time to a trip into town, Snider has captured every emotion, every tiny detail, right there on the page.

The Golden Pathway nearly moved me to tears. As someone who has spent a great deal of time studying this period of American history, I’m certain this book has the ability to make a great impression on its readers. I highly recommend it. I hope it finds its way into schools and homes everywhere, as this is a message, you won’t want your kids to miss. 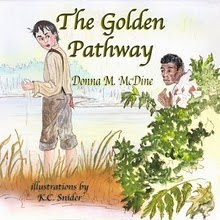 Raised in a hostile environment where abuse occurs daily, David attempts to break the mold and befriends the slave, Jenkins, owned by his Pa. Fighting against extraordinary times and beliefs, David leads Jenkins to freedom with no regard for his own safety and possible consequences dealt out by his Pa.

He clamped his hands over his ears, but it didn’t block the high-pitched screams from the barn. He knew they would stop. They always did. Yet, the silence scared David even more, knowing Pa would seek a new victim.

Clank. The buckle from Pa’s belt hit the floor.

David grabbed his boots and with shaky hands slid them on. His small size made it easy to hoist himself out the bedroom window and shimmy down the trellis. David did his best not to leave any footprints in Ma’s tomato garden. He made sure each night to leave the straw broom on the front porch leaning against the railing by the garden. David reached over the railing for the broom. He carefully brushed the dirt to hide his footprints, all the while backing out of the garden. Satisfied that he’d covered his tracks, David shook the dirt off the broom and placed it back on the porch.

If Pa found out what he was doing, he’d skin his hide for sure. David loved Pa, but he had to make this stop. 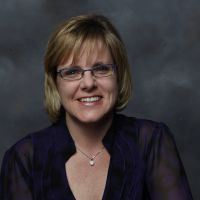 and two Honorable Mentions in the 78th Annual Writer’s Digest Writing Competition. Donna’s stories and features have been published in many print and online publications, and her first book, The Golden Pathway, will be published through Guardian Angel Publishing. Ms. McDine is a member of the SCBWI, Musing Our Children, and The National Writing for Children Center. Learn more about Donna at www.donnamcdine.com if you sign the guestbook, you’ll receive a FREE e-Book Write What Inspires You: Author Interviews, and http://www.donna-mcdine.blogspot.com and http://www.thegoldenpathway.blogspot.com.

Learn more about Donna McDine and The Golden Pathway by checking out THE GOLDEN PATHWAY VIRTUAL BOOK TOUR SEPT/OCT ’10! Visit www.pumpupyourbook.com during September and October to see where Donna stops next.

You can purchase The Golden Pathway at Amazon.com and at the publisher’s website.