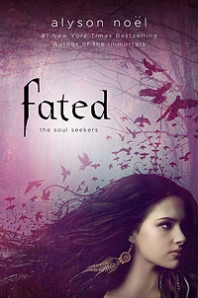 Life changes for Daire Santos at age seventeen. In fact, things get so weird that her mother, Jennika, a film make-up artist, sends Daire to her grandmother in a little town called Enchantment, New Mexico. For a rebellious teen like Daire, this dusty backwater is anything but enchanting. She is also scared of what’s been happening to her: animals follow her; crows mock her; the atmosphere turns hazy and glowing people appear from out the blue. Daire wonders if she is actually having the nervous breakdown her mother thinks she is. Once in Enchantment, her grandmother starts piecing together the puzzle that Daire’s life has become. She is not going nuts. Daire has a role in life that ultimately she’s not too keen on accepting. Her father was a gifted Soul Seeker, as is Daire. His death points to the ominous force looming, one that Daire needs to battle. To do this, she has to learn her craft as a mystical Soul Seeker, one who can navigate between the Upperworld, Middleworld, and the dark Underworld. Daire must also connect with her Shaman bloodlines and her animal guide to harness the kind of magickal powers she’ll need. Added to this, Daire meets Dace, the boy she has dreamed about. He is a handsome, pure young man, with similar powers. Alas, his twin, Cade is the exact opposite, and represents evil incarnate. The fight for control of Enchantment begins…
In a novel twist, this book introduces Native American traditions, mythology, and legends to the YA market. This makes for an intriguing story as the reader learns with heroine Daire. Admittedly, Daire starts out a little whiney, but that’s understandable with so many seemingly crazy things happening to her. Daire also loses control when nightmarish visions plague her, and that’s not good for the people around her. Daire’s grandmother is a fount of wisdom and it’s a unique way for the author to weave in the kind of traditions and history that give this book its unusual slant. Fated is filled with a rich mythology in the soul visions, the spiritual quest, and the animal guides that all have meaning for Daire. This book does focus on spiritual growth in a fascinating way, and makes a nice change from the usual menu of vampires/werewolves and other undead elements in the YA market. Daire learns about love, trust, faith and hope; all the things that have eluded her up until now. Teens keen on an interesting read will love this book. Fated is Book One in the Soul Seekers series. Look out for Book Two: Echo later in 2012.

No monetary compensation was received for this review.

Reviewer’s bio: Fiona Ingram is an award-winning middle grade author who is passionate about getting kids interested in reading. Find out more about Fiona and her books on www.FionaIngram.com. She reviews books for the Jozikids Blog.