Is it possible a month has passed since my last From the Family Bookshelf column appeared? I swear it couldn’t have, but the last one is dated September 21st, so I guess time slipped away from me.

All of us have been busy. Swimming lessons and dance lessons have started. Dad has been working like crazy. I have been up to my eyeballs with promoting my first children’s book, Little Shepherd, coordinating book tours, and reading. Not to mention family stuff.

Dad finally finished Vince Flynn’s The Third Option. Now he is reading Prince Caspian, which is part of The Chronicles of Narnia series by C.S. Lewis. Though I have seen various movie adaptations of this book and The Lion, the Witch and the Wardrobe, I’ve never read the books. We have the set here, so I’ll have to change that one day.

The Lil Diva is back to reading thanks to school. She read Ginger the Stray Kitten by Holly Webb again. She’s also read a couple of books on Justin Bieber and one on the Jonas Brothers. Just think of what she’ll be like in five years if she’s already into teenage pop stars now. She is currently reading Charlotte’s Web by E.B. White. We saw a stage production of Charlotte’s Web while we were in North Carolina. She came home wanting to read the book, but hasn’t gotten around to it until now.

The Lil Princess is reading anything and everything. We’re on our second round of Pink Princess Rules the Schoo l by Alyssa Crowne. She has brought home books from her school library every week since it opened. This week she has a nonfiction book about puppies. She’s hoping we buy her Green Princess Saves the Day, also by Crowne. Green is her favorite color.

As for me, little ole Mom, I’ve been reading and reading and reading. I just finished Invisible Path by Marilyn Meredith.  This is the latest book in her Deputy Tempe Crabtree series. Marilyn is going on a virtual book tour with this book next month.

I also recently finished A Despicable Profession by John Knoerle, a post-WWII spy thriller, and the legal thriller, Buying Time by Pamela Samuels Young. Both books are excellent and I would highly recommend them.  Before those two I read:

The Lil Princess and I also plowed through a box of books from tiger tales. These books are all part of their Fall/Winter collection. You’ll see review coming for them soon. Last night I polished off the award-winning  Call Me Kate by Molly Roe. This is a young adult historical. I began reading Saving Max by Antoinette van Heugten.

That’s it for this issue of From the Family Bookshelf. Until next time, keep reading! 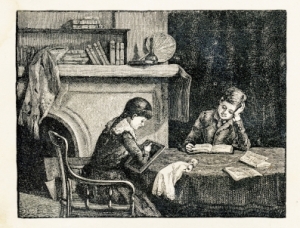 Here we are once again.  It’s time for From the Family Bookshelf, the weekly (hopefully) column that talks about the books that we’re reading, have read, or want to read. There’s four of us in this little old house:  Mom (me), Dad, the Lil Diva (8), and the Lil Princess (6).

Let’s see what we’re all up to this week!

I’ll go first again this week. I just wrote up three book reviews: Noonie’s Masterpiece (MG), The Power of Your Child’s Imagination (Parenting), and The Way to Stillness (inspirational self-help). I posted one of these so far. The other two will appear later this week at The Book Connection. I also have two other reviews left to write.

I am going to start Faith and Finances tonight. This is a book by several authors who collaborated to bring you spiritual insight and practical advice on:

Dad is still muddling through the thriller, Prayers for the Assassin , by Robert Ferrigno. Did I mention he’s a slow reader?  🙂 He’s liking it, so that’s what matters.

The Lil Diva was happy to return to school today and find that her latest Scholastic book order had come in. It contained the much coveted Justin Bieber CD and a book on the teen pop sensation, Justin Bieber His World by Riley Brooks. I’m honestly not sure why she is so into Justin Bieber, but if it gets her to read, then she can buy every book about this teen pop sensation ever printed.

The Lil Princess surprised me this week and picked up Hop on Pop by Dr. Seuss.  She likes her Dr. Seuss books, but lately she’s come away from them and seeks more challenging material. She has one of the Diary of a Wimpy Kid books if that gives you any clue as to what I am talking about. She’s can’t really read those, but she usually leans toward more complex books.

Until next time, keep reading! 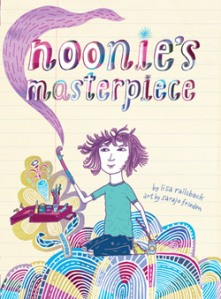 You are going to fall in love with Noonie Norton!

Noonie’s Masterpiece tells the story of Noonie Norton, a ten-year-old aspiring artist who is stuck living with her Aunt Sylvia, Uncle Ralph, and annoying Cousin Junior. Her mother died when she was in kindergarten and Noonie’s father is an archeologist. Rather than take Noonie along on his many digs, the stability of a regular family life is what her father believes is best for Noonie.

Problem is, Aunt Sylvia, Uncle Ralph, and that annoying cousin of hers can’t possibly understand Noonie’s genius. So Noonie wanders through different periods of her life trying to make it the best she can, sure that she’ll be discovered at any moment.

When Noonie hears of her school’s art contest, she’s determined to win first place, even if Sue Ann Pringle wins everything. Maybe then, Noonie’s dad will come home pronto.

Noonie’s Masterpiece is a brilliant story by Lisa Railsback. With Noonie Norton, Railsback has created a character that middle graders can’t help but sympathize with. Here’s Noonie, stuck with relatives while her father travels around the world with his job. She has a best friend, Reno, who is a bit of nerd. He’s a clumsy fellow, and he tries Noonie’s patience. Then, of course, there’s Sue Ann Pringle. That girl is perfect compared to Noonie and she wins all the school contests.

To say that Noonie has a lot on her plate, is perhaps, the understatement of the day. This is just one of the many things that will allow readers to relate to Noonie. Since this story is told in a humorous way, even the tougher topics, like Noonie missing her mother, are easier for readers to deal with.

The artwork for Noonie’s Masterpiece was created by Sarajo Frieden. From depicting Noonie’s many wonderful creations, to the illustrations of Noonie, Ms. Lilly, the art teacher, Reno, Sue Ann, and more, Frieden did a superb job of bringing this story to life in a visual way.

I choose Noonie’s Masterpiece while sitting around waiting for my laptop to reboot. The book I was reading was downstairs, so I picked up Noonie for a few seconds. I ended up reading all of Noonie’s story before continuing on with the other book. Railsback hooked me right away and I didn’t want to let go of Noonie until I was done with her. Let’s face it, if a character tells us that she’s a brilliant artist who hasn’t been discovered yet, and proceeds to tell you that she is going to explain her art while she’s alive because you never know if tomorrow she would be “trampled by a herd of kindergarteners” or “might choke to death on a rotten nut”, you want to pay attention to what she has to say.

I immediately fell in love with Noonie, and you will too.  It’s one of the best middle grade books I’ve read in while.