Unknown to Dawn, her grandfather has shot an old swan out of mercy. In their coastal Alaskan town, her father buys the swan pelt, preventing her Uncle Alex, a fur trader, from selling it for export. Dawn’s father surprises her part-Aleut mother with a hat she helped to make and also with an idea to catch poachers. Shooting swans has become illegal but Alaska is a territory and Prohibition occupies the Sheriff. Dawn and her mother become involved with suspicious responses to the swan bonnet besides its haunting effect. Because Dawn’s grandparents see the swans first, Dawn agrees to secretly watch the migration with the Deputy Sheriff’s son. But after she and her mother encounter women from a ship and find out about a hunting party, they ride to the inlet. There are also townspeople roving the shore but who is the vigilante and who is the poacher?

We tend to absorb the history of our environment. As it was for many, Alaska was romantic to me as a frontier, romantic while living in the city. All of a sudden someone would leave Minneapolis for Alaska. My brother went there to do legal work after he had worked with Indian Legal Aid in Duluth. While he was on the south coast, I thought of moving. I read up on the state and became caught up in its history. The near extinction of swans in the United States had me thinking about settings, and soon I was planning a story.

Learning about Alaska was like learning grammar through a foreign language. I’ve never read a history book about Minnesota, though I have Midwestern ancestry going back to the mid-1800s. Mining hopes in Alaska were very similar to those on Minnesota’s Iron Range in the early 20th century. The influx of people in Northern Minnesota had similarities to Alaska’s new population. Sometimes they were the same people. Like Alaska, the fur trade began Minnesota history. I’d heard much about the 1920s on the Iron Range from my mother. Boomtowns and sudden wealth mapped the region.

After being fascinated with two books of Alaskan history, I researched swans. I read how warehouses with thousands of swan pelts were discovered, more than 10,000 at a time. Eventually hunting laws were enforced and a successful environmental chronicle was documented. I began my Alaska story as a shorter fiction about an Irish immigrant couple who bought shore property where swans migrated. But soon the story led to a coastal town and characters emerged.

When I thought of the swans being killed in masses, I knew that few women were part of such a money-making venture. How much did women help such an environmental campaign in a lone setting when a particular species were illegal to hunt? It is known how women responded to Prohibition then.

I posted the book at Authonomy.com in 2009, while I began to re-work the historical detail. I was afraid the swan hat would seem far-fetched. But it wasn’t historically. The West established its own dress. I actually hadn’t seen Chaplin’s The Gold Rush and later, when I watched the VHS, the women’s fur hats were part of the entertainment.

Not until I was rewriting the book did I realize the inspiration for the swan hat. Of course, it was meant to be the white hat of the western. But I remembered from my grade 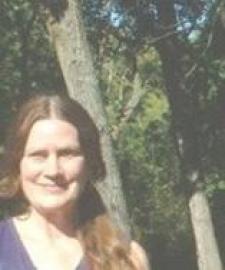 school years the pheasant pelts one of my brothers brought home after hunting. He hung the pheasant pelts on the wall of his room and then in the basement. These pelts fit neatly on the head so that, with my friends, I wore a pheasant hat – until my mother found out and scared us about lice. There is some kind of method to storytelling after all.

Katherine L. Holmes’s first published novel, The House in Windward Leaves, was an E-book Fiction Finalist in the 2013 Next Generation Book Awards and also a Juvenile Fiction Finalist in the 2013 National Indie Excellence Book Awards. Her short story collection, Curiosity Killed the Sphinx and Other Stories, was published by Hollywood Books International. In 2013, The Wide Awake Loons was published by Silver Knight Publishing and The Swan Bonnet was published by Enigma Press. Katherine lives in Duluth, Minnesota, where besides writing, she works with used books.

Visit the author online at  https://sites.google.com/site/katherinelholmesauthorprofile/