Like many Drakes before him, John William Drake was born to be an explorer. When he discovers a book hidden in the ceiling of his family home, his father promises they are about to embark on a grand adventure. But when his father mysteriously disappears, John William moves in with his Uncle Andrew. A year passes with no word regarding his father’s whereabouts. That all changes on John William’s twelfth birthday, when he receives an invitation to change his destiny.

In this unknown land, John William searches for his father. His quest will find him getting help from a hopper and an Empyrean, and will endanger all their lives as they fight off the Bandits of Basswood. Can they escape? What other adventures are in store for John William and his friends? Will he ever find his father?

While I am not a huge reader of fantasy novels, I love stories filled with adventure. Bandits of Basswood certainly has tons of that. From the moment John William embarks upon the search for his father, it is a wild ride of deciphering clues, dodging bandits, and meeting fantastic creatures along the way. It kept me turning the pages and ended where I felt appropriate.

The one challenge for me is that this book had formatting and editing issues. The paragraphs were block style instead of indented, which made for a clumsy and sometimes confusing read despite the double-space between lines. Dialogue from one character would run into the dialogue of another character. In addition, there were typos and grammar errors. As an editor, it is tough for me to simply just read a book, but it went beyond that. Missing opening or closing quotation marks around dialogue, wrong words used, and instances where in one paragraph a word specific to this story would be capitalized and then further down in another paragraph it would be lowercase.

I love the idea behind this story. The characters are unique. The artwork is beautiful. Tidy up the formatting and editing, and it will be a fabulous read.

I received a digital copy of this book from the author through Pump Up Your Book. This review contains my honest opinions, which I have not been compensated for in any way.

What if the pull of a video game was impossible to resist?

When Ethan and his friends play the much anticipated new game, Seeker, they are thrown into a new world where the lines of reality and gaming are blurred. As people close to Ethan, including his sister, start to disappear, Ethan and his team must free the trapped souls, defeat the dark wizard, and stop the destruction before he and his friends are trapped forever.

THE PULL OF THE GAME
Ever play a video game and wonder where the past 6 hours went
Ever feel like it was time to pull away, but you had to play just one more level
Ever think, “Just one more try.”

Ethan, a tech-savvy gamer, joins the newest gaming rage-Seeker. With his best friends in tow, they try it and fall in love with Bailiwick, the realistic gaming world where the game takes place. Ethan senses something is off as he learns more about the coveted game. When a school friend goes missing, and later his sister, Ethan and his friends discover Nith, a dark wizard, is trapping players inside the game.

When Ethan and his friends set out to help the trapped players, he discovers there is much more to just being trapped in the game. He learns of Nith’s plan to merge the digital world with the real world. The more souls Nith collects, the more powerful he becomes!

Will Ethan and his friends be able to stop Nith even as he gains more power with each trapped soul? Or will they join the others who are destined to be trapped forever and become part of Nith’s NEW WORLD?

A story about friendships, family, gaming, and growth, Souled is an action-packed book filled with one adventure after another. 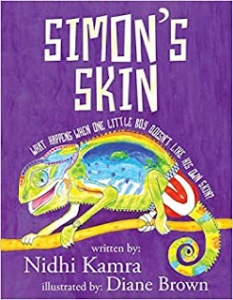 Simon’s Skin by Nidhi Kamra teaches is a funny way to teach youngsters to be comfortable in their own skin.

Simon thinks his skin is boring. So, he tries on a variety of different skins. He quickly comes to a surprising conclusion.

This is such a neat book. Between the catchy text and the vibrant artwork, children are bound to be thrilled with it. Though I try not to make many comparisons to other books, Simon’s Skin reminds me of a modern I Want to Be Somebody New! by Robert Lopshire. Artist Diane Brown’s colorful artwork will definitely make youngsters want to pick up the book, but it is Kamra’s engaging story that will keep them turning the pages. Having read books from Kamra before, I knew this would be a good one. This topic is also timely, because it teaches kids to be comfortable in their own skin.

A silly story with a good lesson hidden inside is what you’ll find in Simon’s Skin.

I received a digital copy from the author. This review contains my honest opinions, which I have not been compensated for in any way.

Becky and Joe Mellor return to Bowen Hall for the half term holidays to find things are as unusual as ever. Of course, that’s to be expected when you’re sharing a stately home with a dinosaur, a winged horse, two sabre-tooth tigers, Will Scarlet and Bowen Hall’s latest resident – a dodo named Deirdre. Things, however, get more intriguing when American time traveller, Bruce Westbrook, arrives with two gold doubloons that seem to possess strange, supernatural powers.

So begins a thrilling adventure that leads Becky, Joe, Uncle Percy and Will to 1920s Chicago, Victorian Edinburgh and the 18th Century Caribbean – battling gangsters, pirates, sea-monsters and zombie sharks on a quest for the legendary Pandora’s Box …

The clock is still ticking … 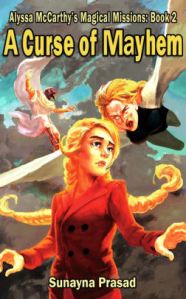 Alyssa McCarthy thought she left magic behind for good. But, she was wrong. When her uncontrolled powers are unleashed on her hometown, her school, and her friends, Alyssa must boost her bravery and confidence to defeat Errol’s evil plan.

Published as Wizardry Goes Wild in 2016 and The Unruly Curse in 2019, A Curse of Mayhem by Sunayna Prasad continues the adventures of thirteen-year-old Alyssa after her return from Fiji. Now cared for by her godfather Alex, Alyssa lives the life of a normal teenager. She has a great group of friends and has a crush on a classmate. Alex and Alyssa have a good relationship now that Uncle Bruce is out of the picture. Normal flies out the window, however, as soon as Alyssa discovers her powers have returned with a vengeance and she can’t control when or how they will be unleashed. Her life now turned upside down, she learns with the help of her magical friend Simon about the curse Eerol placed on her and how she must boost her bravery and confidence if she ever hopes to defeat him.

The second book of the Magical Missions series opens with a startling revelation. This swift-moving plot encourages the reader to turn the pages. Filled with magic, chaos, and a bit of humor, A Curse of Mayhem is an exciting story with a protagonist middle-grade and teen readers will relate well to.  The underlying message of increasing your bravery and confidence is nicely woven in. 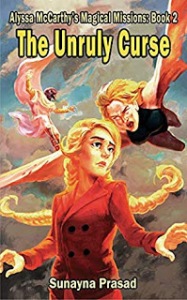 This reader found challenges with the choppy dialogue and how totally unsympathetic the adults acted. A top-notch editor could help shape this story in those areas and perhaps break up the enormous amount of dialogue with some narration and description; though when the author creates descriptions she does a fantastic job of it. It is my sincere hope we see a continuation of Alyssa’s adventures in a new story soon.

I received a digital copy from the author through Pump Up Your Book. This review contains my honest opinions, which I have not been compensated for in any way.