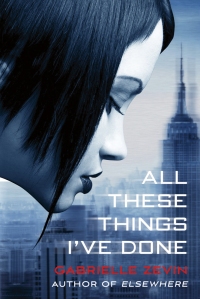 Fast forward to a semi-dystopian 2083, where pleasure items such as chocolate and coffee are banned, paper is in short supply (thus, no more books are printed), water is rationed, and New York City is a hot bed of crime and poverty. Simple things like telephone calls and emails carry a high price tag. Museums, libraries, and cultural centres have closed down, lakes have dried up, and people wear ‘vintage’ clothing because garment manufacture has stopped. You can’t even get fruit! Yet, life goes on and people manage…in a way.

Anya Balanchine is the sixteen-year-old daughter of the city’s most notorious (and dead) crime boss. The Balanchine family manufactures chocolate, a business that now carries a criminal label. Anya’s mother was killed in a botched assassination attempt on her father’s life. The incident also injured her older brother Leo, leaving him childlike in an adult body. It’s up to Anya to keep the remaining family together, and still shoulder the tasks of going to school, taking care of her siblings and her dying grandmother. Anya is out the family’s immediate sphere of activities until a batch of Balanchine chocolate, given to her by a cousin, has fatal consequences. Anya’s ex-boyfriend is almost fatally poisoned and the police naturally think she’s to blame. At the same time, her new boyfriend’s father, the assistant DA, tells her to keep away from his son (Win) or else! Suddenly, Anya finds herself the focus of public attention and that’s not good! Things go from bad to worse when gentle Leo, who had started working for the family as a gopher, takes it into his head to shoot his uncle, now the head of the Balanchine family business. Everything spirals out of control and Anya faces a heart-breaking decision in order to save her brother and her younger sister.

Told from Anya’s point of view, the story unfolds as Anya battles hardships, trying to salvage her life. Anya is feisty and brave, with a slightly hardened attitude to relationships and people. A nice touch is Anya’s increasing memories of things her father said, and his words of advice. In this way, the father becomes like a living character. Anya will do anything to protect what remains of her family. She is also loyal to her buddy Scarlet, a wacky, arty girl, who is a good friend to Anya. The author has captured perfectly the emotional highs and lows of the main character and readers will really bond with Anya. The book has great pace and action until the high point of Anya’s arrest. Then the story slackens and much of what takes place thereafter (exciting in itself) seems almost quickly jammed together to get to the end. This is the first book in the Birthright trilogy, which could account for a rushed conclusion.

Reading level: Ages 12 and up

No monetary compensation was received for this review.

Reviewer’s bio: Fiona Ingram is an award-winning middle grade author who is passionate about getting kids interested in reading. Find out more about Fiona and her books on www.FionaIngram.com. She reviews books for the Jozikids Blog.