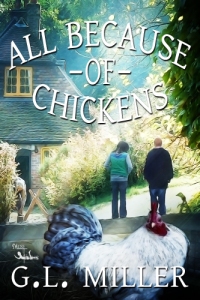 Returning to the family homestead intensifies twelve-year-old Sammy’s longing for the family heritage—farming. But Dad’s ultimatum, “… no crops, no animals, no barn…” shows Dad wants nothing to do with farming, for himself or Sammy. Then why did Dad insist Sammy join a farming club?

Sammy’s problems begin with the early arrival of his peeps and the loss of his best pals.   His ingenuity to care for his chicks, make a new friend, and design a compost bin win him a new name. His biggest challenge—can he butcher his roosters?

Summer’s many adventures include solving a mystery, fighting a hawk, and being disqualified at the County Fair.

At the end of the project, has he won…or lost…the thing he wanted most—Dad’s change of heart about farming?

During a lull in the suppertime conversation, Sammy found the courage to broach the subject. “Dad, Mr. Conklin said we had to bring our signed summer project paper to next week’s meeting.”

“And what have you chosen to do?” asked Dad, sipping his coffee.

“Raise chickens,” mumbled Sammy. Afraid of Dad’s reaction, he toyed with the last of the peas on his plate.

“What?” Dad almost sloshed his coffee as he set down the mug. “I thought you understood there would be no animals.”

Sammy saw Dad’s angry frown and tightly drawn lips. He decided to try a different approach. “Dad, I’m confused. You’re the one who wanted me to join the Ag club of CAYC, the County Agriculture Youth Club. You said you belonged as a boy. Surely you remembered there were summer projects?”

In silence Dad swallowed another sip of coffee. “I remembered,” he said. “But, I was hoping you would get interested in growing flowers for your mother or vegetables for the kitchen. Couldn’t you do that as your project?”

“Well, you said there would be no farming, either,” Sammy pointed out.

“What I meant by that was fields of plants, not just a few around the house or in a small garden.”

“In that case, yes, I probably could.” Then, with heroic effort he blurted, “But that really wouldn’t be any fun. All plants do is sit there. You have to water them and feed them and weed them. And they still…just sit there.”

“You have to feed and water chickens, too,” Mom gently reminded. “And clean their house and take care of them.”

“At least they move. And I could play with them. I know they’d be work, but I hope maybe some fun, too.”

“What made you decide on chickens?” she asked.

“Well,” said Sammy, “first I thought of a foal, but I knew Dad wouldn’t approve of that,” he added quickly, stealing a glance at his father. “Besides, we don’t have a barn or any place to put a young horse. True, during the summer he wouldn’t need much more than a lean-to. Still, I would hope to have him longer than just this summer…” Sammy’s voice trailed off.

“Then I considered a puppy.” How am I going to explain this to Mom? Sammy took a drink from his water glass and quickly got his thoughts together. “I would probably want to have him in the house, though. You know, to play with and sleep on my bed.   But dogs get fleas and shed their hair so I didn’t think you’d permit that.”

Mom’s smile confirmed his supposition. “So that’s when you thought of the chickens?” she asked.

Turning his attention back to Dad, Sammy defended himself. “Not really, Dad. Technically, they’re birds.”

Sammy watched the astonishment in Dad’s face turn to amusement.

“Technically, they are not birds, they are fowl,” Dad replied.

Sammy felt Dad’s hand gently clasp his own, causing him to focus on what Dad was saying.

“Never, Sammy. I would never laugh at you. I love you. You are growing up and using words that surprise me.   I enjoy your ingenuity. I’m laughing in delight of you, but never at you.”

Sammy grinned and ducked his head.

Mom pushed back her chair and stood up. “Let me get dessert, and then you can tell us more about this project.”

“I’ll get my stuff.” Sammy ran to his room for his club materials and the form he and Gran had filled out earlier. He also swooped up his drawings and the copies of the Internet pages. Spreading everything out in front of his dad, he explained what Mr. Conklin was encouraging them to do.

“And Gran said I could use that old lumber behind her shed to make the house.   I mean, coop,” Sammy corrected himself.

“I thought I smelled my mother in this,” muttered Dad.

“Oh no, Dad,” Sammy hurried to set things straight. “I thought of all this myself. When I told her today, Gran asked me the same things you did. All she did was help me to look up some information on her computer and to fill in my form.”

Sammy looked through the papers he’d put on the table. Choosing two, he placed one before Dad.

“See, I’ve even drawn some plans for their coop,” Sammy said. Putting the second page on top, he explained, “And I have enough money in my bank to pay for the chicks, their equipment, and part of their food. I plan to sell their eggs to get more food money.”

Sammy watched Dad’s face for signs of approval. He didn’t realize he was holding his breath until Mom spoke.

“How many peeps are you thinking of getting?” she asked.

“Mr. Conklin said we can buy as few as twenty-four or twenty-five,” Sammy answered. “He’s bringing catalogs to the next meeting so we can see what breeds are available. But, I think I already know what kind I want.”

Sammy searched through his computer printouts. Pulling a couple of pictures from the stack, he handed one to Mom.

“Gran and I looked at different kinds on the computer,” he said. “These Golden Comets seemed to be the most interesting. You can see in the picture that the roosters are white and the hens are red.” Sammy chuckled, and then added, “With that sort of help, I won’t be asking a rooster why it isn’t laying an egg.”

“Good thinking,” agreed Dad. “A beginner needs all the help he can get.”