We all have Christmas stories from our childhood that we still remember…some of us might even have a few of those classic storybooks in our houses now. Here are a few of my favorites.

Christmas is almost here, which means ice-skating, Christmas carols, and sparkly lights everywhere–even on Snoopy’s doghouse! Everyone is enjoying the holiday celebrations except Charlie Brown. Can the Peanuts gang help Charlie Brown discover the true meaning of Christmas?

This first one, I actually remember as an animated TV show. Each year it wouldn’t be Christmas without watching A Charlie Brown Christmas. Decades later, it was released as a children’s story. What a great way to honor this holiday tradition. 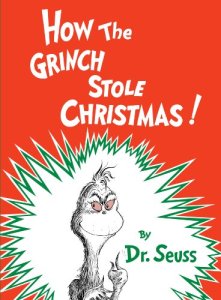 Dr. Seuss’s small-hearted Grinch ranks right up there with Scrooge when it comes to the crankiest, scowling holiday grumps of all time. For 53 years, the Grinch has lived in a cave on the side of a mountain, looming above the Whos in Whoville. The noisy holiday preparations and infernal singing of the happy little citizens below annoy him to no end. The Grinch decides this frivolous merriment must stop. His “wonderful, awful” idea is to don a Santa outfit, strap heavy antlers on his poor, quivering dog Max, construct a makeshift sleigh, head down to Whoville, and strip the chafingly cheerful Whos of their Yuletide glee once and for all.

This is another story I knew as a TV show first, but we still have this book in our basement. I never quite understood the orange cover, but this is a must read each Christmas.

Based upon the poem, “A Visit from St. Nicholas,” a father narrates this story of seeing Santa Claus on Christmas Eve. There are numerous versions of this story with a variety of illustrations. This is a pretty cover. I’ve also used the poem as inspiration for my own Christmas poetry.

The Best Christmas Pageant Ever follows the outrageous shenanigans of the Herdman siblings, or “the worst kids in the history of the world.” The siblings take over the annual Christmas pageant in a hilarious yet heartwarming tale involving the Three Wise Men, a ham, scared shepherds, and six rowdy kids.

Honestly, it took me a bit of time to warm up to this story, but now that I have, I love reading it from time to time.

“The Gift of the Magi” is a short story written by O. Henry (a pen name for William Sydney Porter), about a young married couple and how they deal with the challenge of buying secret Christmas gifts for each other with very little money. As a sentimental story with a moral lesson about gift-giving, it has been a popular one for adaptation, especially for presentation at Christmas time. The plot and its “twist ending” are well-known, and the ending is generally considered an example of cosmic irony.

This is another story that I had to warm up to. The message is wonderful, but I always felt it a tad too much for kids to handle. As an adult, I appreciate it a lot more.

What are a few Christmas classics you recall from your childhood?