Joe Sergi is on tour with the second book in his Sky Girl series, Sky Girl And the Superheroic Adventures. This is a young adult superhero fantasy novel. 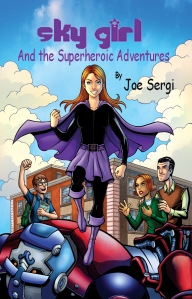 BLURB:  Being a teenage girl is hard enough, but for DeDe Christopher, it is proving impossible.

In addition to cliques, books, and boys, she has to worry about capes, apes, and aliens. Last year, DeDe discovered that she possessed fantastic abilities that were strangely similar to those of a comic book character named SkyBoy.

With the help of her best friend Jason, a self-professed comic geek, DeDe accepted her legacy and became Sky Girl. Now, DeDe must learn what it means to be a heroine as Sky Girl faces the all too real enemies and allies of SkyBoy, including the clever Quizmaster, the beautiful Penny Pound, the enigmatic Jersey Devil, and the magical MissTick.

DeDe must also face personal challenges as she discovers the secrets of her late father and his connection to Skyboy–secrets that will affect Sky Girl’s destiny.

COVER: I’ve loved both Sky Girl covers for their vibrant, eye-catching colors. As a comic book fan in my childhood, this cover definitely brings me back to those days of Wonder Woman and Superman.

FIRST CHAPTER: Nick is walking along warily by City Hall Park in Manhattan when a noise catches his attention. With crime elevated in the city, you can’t be too careful. After accidentally being knocked on his keister by a young girl in a trench coat, he feels somewhat more at ease, thinking she was the source of the noise. He quickly finds out how wrong he is and, as the criminals descend upon him, Nick comes face-to-face with Sky Girl.

KEEP READING: Sure thing.  After a moving prologue, which the author cleverly titles Chapter 0, the action quickly takes front and center. While I was a bit surprised DeDe, a.k.a. Sky Girl, wasn’t the first character we meet in Chapter 1, it’s a smart and classic move. How often was Superman or Batman in the opening scene? Um, never. The crime is in progress and then the superhero shows up. This shows Sergi’s knowledge of the genre in which he writes; always a pleasure.

Because of Chapter 0, you know there is a lot more to DeDe’s story than meets the eye. But you don’t get into that at all in the first chapter. I like that air of mystery surrounding her. It compels me to move through the story to see how DeDe is coping with what transpired in her past. Comic relief is provided by DeDe’s attempt at witty banter with an as yet unknown entity.  It’s confusing for poor Nick as he listens to her talk to someone or something he can’t see.

After this strong opening, I look forward to reviewing the rest of the book later in the tour.

Joe Sergi lives outside of Washington, DC with his wife and daughter. Joe is an attorney and a Haller Award winning author who has written articles, novels, short stories, and comic books in the horror,

scifi, and young adult genres. Joe is the creator of the Sky Girl series of novels and the editor of Great Zombies in History. His first novel, Sky Girl and the Superheroic Legacy was selected Best of 2010 by the New PODler Review. Joe is a life-long comic fan who regularly writes on the history of comics and censorship for the Comic Book Legal Defense Fund. A complete list of Joe’s titles is available atwww.JoeSergi.net. When not writing, Joe works as a Senior Litigation Counsel in an unnamed US government agency and is a member of the adjunct faculty at George Mason University School of Law.

I received a free PDF version of this book from the author, who is on a tour with Pump Up Your Book. This review contains my honest opinions, which I have not been compensated for in any way. 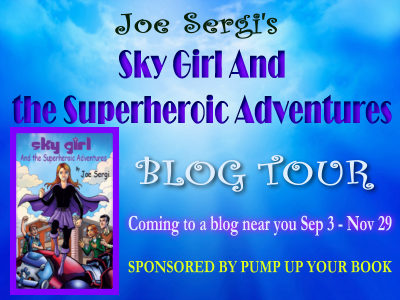 One thought on “First Chapter Review: Sky Girl And the Superheroic Adventures by Joe Sergi”