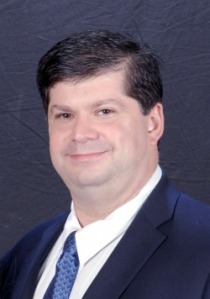 Today’s guest blogger is Joe Sergi, author of Sky Girl and the Superheroic Legacy. Joe Sergi is an author who lives outside of Washington, DC with his wife, Yee, and daughter, Elizabeth.  He has published short prose stories and articles in the horror, science fiction, and super hero genres. Joe has also written for comics in the romance, horror, science fiction, and super hero genres. Sky Girl and the Superheroic Legacy is his first novel.  In 2008, Joe was selected as a semi-finalist in the Who Wants to Create a Superheroine contest sponsored by the Shadowline Imprint of Image Comics. When not writing, Joe works for an unnamed government agency.

Joe’s publications can be found at www.joesergi.net. For more about Sky Girl and the Superheroic Legacy, visit the book’s website at www.skygirlnovel.com.

“The Secret Origin of Sky Girl” by Joe Sergi

Stan Lee once said that he created Spider-Man because he saw a spider on the wall of his studio.  Frankenstein’s Monster was dreamed up over a rainy weekend in 1816.  The lead character of Sky Girl and the Superheroic Legacy was conceived in a comic’s podcast forum project and born out of a father’s love for his daughter.

The Comic Geek Speak Podcast is made up of a bunch of great guys that love comics.  I have listened to them for several years and am still an active member of their forums.  It was on those forums that I learned about a proposed prose anthology, which would be written by the listeners of the podcast.  I wrote a story called the Return of Power Boy, a story about a middle aged accountant, who may or may not be a superhero.  (The anthology was never produced and the story was later featured in A Thousand Faces, the Quarterly Journal of Superhuman Fiction.)  The story was a very dark tale of what happens when a super villain wins.  One of the very minor characters was the accountant’s four year-old daughter, CeeCee.

Sometimes writers don’t create their characters, they channel them and that’s what happened with CeeCee.  After the story was finished, I 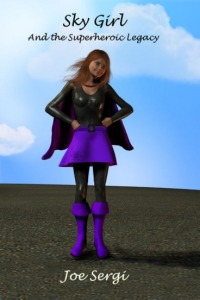 kept coming back to that little girl.  What kind of life would she live, would she develop her father’s powers, and what would she do if she did?  Well, CeeCee became DeDe, and the character of Sky Girl was born.

By this time, I had a daughter of my own, Elizabeth.  And I can’t help but think that this is what converted the very dark Powerboy story into the light hearted story of Sky Girl and the Superheroic Legacy.  It is also why DeDe is a strong teenager and not defined by the men in her life.  Don’t get me wrong, she is not your typical one-dimensional stereotype.  Like most of us, DeDe is bold and confident when she is with her best friend and family, yet she is shy and insecure in public, especially when it comes to her crush, Adam, and rival, Nicole.  This first book is really about DeDe’s journey to find herself and she makes a lot of good decisions, but she also makes some bad and selfish ones.  But, she ends up in the right place.  I hope she inspires my daughter to make good decisions.

At one point in the evolution of the story, someone had suggested that I make the main character into a boy (because comic readers are predominantly male).  That idea never caught on because I think women and men handle conflict differently.  This concept is explored more fully in the second book, Sky Girl and the Superheroic Adventures.  For example, there is a cliché in comics that when two heroes meet, there is always a misunderstanding that requires the two superheroes to fight before they can team up.  DeDe handles this type of conflict very differently when she goes up against another costumed heroine in the second book.  Similarly, comics frequently feature the grudge match, where a villain challenges a hero to a fight where the only goal is for the villain to beat the hero senseless (usually culminating in a new costume for the hero and a rematch).  In my opinion, a superheroine would not engage in this mindless violence and would instead respond with a polite “no thank you” before flying away.  Does that make women better heroes–absolutely not–but it does allow an outlet for more creative storytelling.

At the end of the day, Sky Girl and the Superheroic Legacy, and the character of Sky Girl is the culmination of reading far too many great comics, finding far too few strong female characters and loving my daughter just enough.  I would like to thank The Children’s and Teens’ Book Connection for letting to talk about the secret origin of Sky Girl.