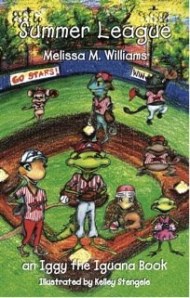 Iggy the Iguana and his friends are back in Summer League by Melissa Williams.

Having survived the fourth grade, Iggy and friends are happy that summer is finally here. For many of them it means playing baseball on the All-Star team.  For Iggy, that means facing a very difficult situation that could change his entire future in sports. Oh, and things have changed a bit with Liz just to make the summer a bit more challenging. There’s this mysterious guy on the team too.  And Iggy’s younger sister Molly is having her own troubles with growing up. Good thing their parents are around to talk to.

In this sequel to Iggy the Iguana, we discover life flowing along at a rapid pace for Iggy, Kit Kat, Snap Shell, Liz, Molly and many of the other characters we met in the first book. As impressed as I was with Iggy the Iguana, I like Summer League ten times more. Williams does an excellent job in developing these characters, tossing things up for them, as it often is at this age for children.

Iggy has a secret that he’s trying desperately to hide. The mysterious Marc Mouse is on Iggy’s baseball team and there is just something odd about this shy little mouse and his many hats. It doesn’t help that Marc wins the position of shortstop that Kit Kat wanted. It’s good to see this mystery about Marc solved by the end, as Williams uses it to teach a valuable lesson. I also liked to see that Molly isn’t forgotten while Iggy is going through his own troubles.

I especially enjoyed what Williams decided to do with Liz and Iggy in this one. I don’t want to give anything away, but I felt the changes and challenges these characters went through in Summer League worked well coming off the first book, and that readers will enjoy watching more of Iggy and Liz together.

I’m excited about this series and can’t wait until the next Iggy book comes out.