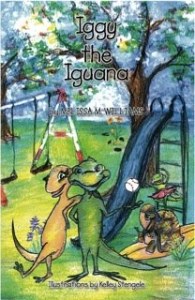 Get ready for Iggy the Iguana by Melissa Williams. Iggy is nine years old and starting at a new school. It’s hard to move and make new friends. Iggy is one nervous iguana. He’s got an annoying younger sister too. And man does Molly have some outrageous outfits.

But soon Iggy starts to make new friends. He’s got his best friend, Snap Shell, a turtle,  and an off-the-wall cat named Kit Kat. His new teacher is really nice too. There is one tiny problem though–his friend Liz is also an iguana, and Iggy is crushing on her. Oh, and there’s that bully, Buddy the Bullfrog. Seems he’s the principal’s grandson and takes full advantage of that. Not only that, Buddy might like Liz too!

I found a lot to like about Iggy the Iguana. In a fun and engaging way, this book explores the challenges of being the new kid at school, moving into a new place, making new friends, and dealing with people that are different from you.

The cast of characters is as fascinating as the storyline, and readers ages 7 to 11 will be totally captivated by Iggy and his friends. Though I adore Iggy and his circle of new friends, I found his younger sister Molly stole my heart.  One minute annoying and the next cute as a button, it looks like she will continue to be a thorn in Iggy’s side for several more years. I also like that Iggy’s parents play a significant role in this book. Iggy’s dad is a marathon runner. He has a big race coming up that the family turns out to support him in.

My only sticking point is that a good portion of the book deals with Iggy’s crush on Liz. As a parent, I have a hard time trying to imagine a nine-year-old boy having a crush that is strong enough for him to be jealous of the attention another boy pays to a girl. Now, this is a very innocent crush and I’ll admit to being a bit old fashioned in this regard, but I also have an eight-year-old daughter.  Boys are pretty much the farthest thing from her mind, and that doesn’t bother me one bit.  🙂 I think Williams did an excellent job in how she handled this particular aspect of the book, I just didn’t care for it.

The illustrations provided by Kelley Stengle are absolutely charming. I love the cover art on this one. And that picture of Molly in her wedding outfit made me crack up.

Iggy the Iguana is going to be a huge hit with readers. It helps kids appreciate their differences and lets them know that they are not the only ones dealing with certain difficult situations.

Iggy the Iguana is the first book in the Iggy Chapter Book Series for ages 7 to 11. The story focuses on the major themes of acceptance, friendship, and diversity while Iggy starts a brand new school. The transition from a private “all-lizard” school to a public “all-animal” school is eye opening, as Iggy soon accepts that just because other animals are different doesn’t mean they can’t be your friends. By the end of Iggy’s 4th grade year, he realizes that changing schools was the best move he could have ever made!

Summer League is the second book in the Iggy the Iguana Chapter Book Series for ages 7 to 11. After an exciting school year, Iggy and his friends kick off their summer vacation with some fun in the sun and … baseball! While playing on his All-Star little league team, Iggy faces a very difficult situation that could change his future in sports forever. Iggy learns many valuable lessons during the summer, most importantly, it is not wise to keep secrets from adults and we can’t judge others on the outside.

Melissa M. Williams is an advocate for literacy and creativity in children. Her children’s chapter books were inspired by real life

experiences with childhood pets she owned while growing up in Houston, Texas. While finishing her Master’s degree in Professional Counseling, Melissa started substitute teaching for elementary schools in order to understand the daily life of her young audience. The students helped her create relatable and realistic stories while including lessons, values and acceptance within the story-line. In addition to writing, Melissa spends most of the school year speaking to students about her own journey as an author and the process of creative writing, while encouraging each student to think outside the box, follow their inner passion, and write their own stories.

Win the Iggy the Iguana Give Away!

Including the Newly Released Items in Iggy Collection, Snap Shell the Turtle (Plush Doll), Iggy Collector’s Baseball Cards, and The Read3Zero T-Shirt … supporting the fight against illiteracy 30 minutes at a time. Be our most active visitor during the tour for a chance to win this Iggy Collection — the tour schedule is posted at http://virtualblogtour.blogspot.com/2010/01/iggy-iguana-and-melissa-m-williams-tour.html to make it easy for you to visit and comment. To learn more about Iggy and Melissa Williams – visit www.iggytheiguana.com.

16 thoughts on “Iggy the Iguana by Melissa Williams”